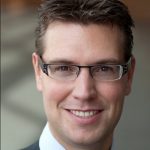 Dr. Jesse Weltevreden has been professor of the e-Business professorship at the AUAS’ CAREM since 2010. He was also chairperson of the CAREM from June 2010 until May 2015.

Dr Weltevreden’s PhD at Utrecht University discussed the impact of online shopping on retail businesses in Dutch inner city areas. From January 2006 until July 2007 he worked as post-doctoral researcher at the Bureau for Spatial Planning in The Hague. There he mainly researched the impact of online shopping trends on retailers, consumer behaviours and shopping areas in the Netherlands.

Between August 2007 and December 2012 Jesse worked as head of Research at BOVAG, the branch association for retailers in mobility. Jesse has published extensively in both national and international journals about the consequences of e-commerce or consumer behaviour, retail business, mobility and shopping areas.

Jesse Weltevreden is the author of the book “Winkelen in het Internettijdperk” ( Shopping in the age of the internet) published in 2007.